But what I know from experience is that I will soon stop thinking about Las Vegas. We will all move on to the next tragedy. We have become more and more accustomed to these kinds of incidents and we are beginning to accept that our daily lives are as dangerous as a war zone.

I heard a man interviewed on NPR earlier this week who had been in the military for twenty years. While attending the concert in Las Vegas, he heard gunshots and his training kicked in. He explained how he helped move the wounded into a separate area, how he helped carry people on pieces of the gate, how he loaded bleeding people into stranger’s cars and trucks because the ambulances were too far away. The interviewer asked him if he’d ever seen anything like that scene Sunday night and he replied that he never had. This man was in the military for two decades and ended up using his skills at a country music festival in Nevada.

Some are calling this latest mass shooting “an isolated incident.” Even after Orlando, Virginia Tech, Charleston, San Bernardino and Newtown? An organization called “Everytown For Gun Safety” reports that there are on average nearly 12,000 gun homicides a year in the United States. Somehow, even with these astounding numbers, we are still caught off guard when people actually use the guns that our laws allow them to buy. Pretending like we have no experience in this kind of horrific violence and can’t figure out what to do to prevent it is disingenuous and unimaginative.

After twenty children and six teachers were killed at Sandy Hook Elementary, I really thought we would make some huge strides in banning semi-automatic weapons and in establishing a national gun registry. I thought that the slaughter of innocent children would change everything.

I know we are divided as a nation regarding second amendment rights and gun control legislation. I also know, though, that most of us want to live in a country where we don’t have to be afraid of each other. We don’t want to have to be afraid for our children every time they go to school or attend a music festival. We want to end this violence. 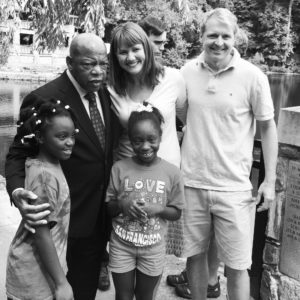 Last night, Rep. John Lewis said, “We were elected to lead. Have courage. Have the raw courage to make a down payment on ending gun violence in America. We can no longer wait. We can no longer be patient.” He went on to say, “Don’t tell me this is about anything other than greed and money and fear. Have courage. Be unafraid. Do your job and bring common sense gun control legislation to a vote.”

Can we agree to finally find our courage?