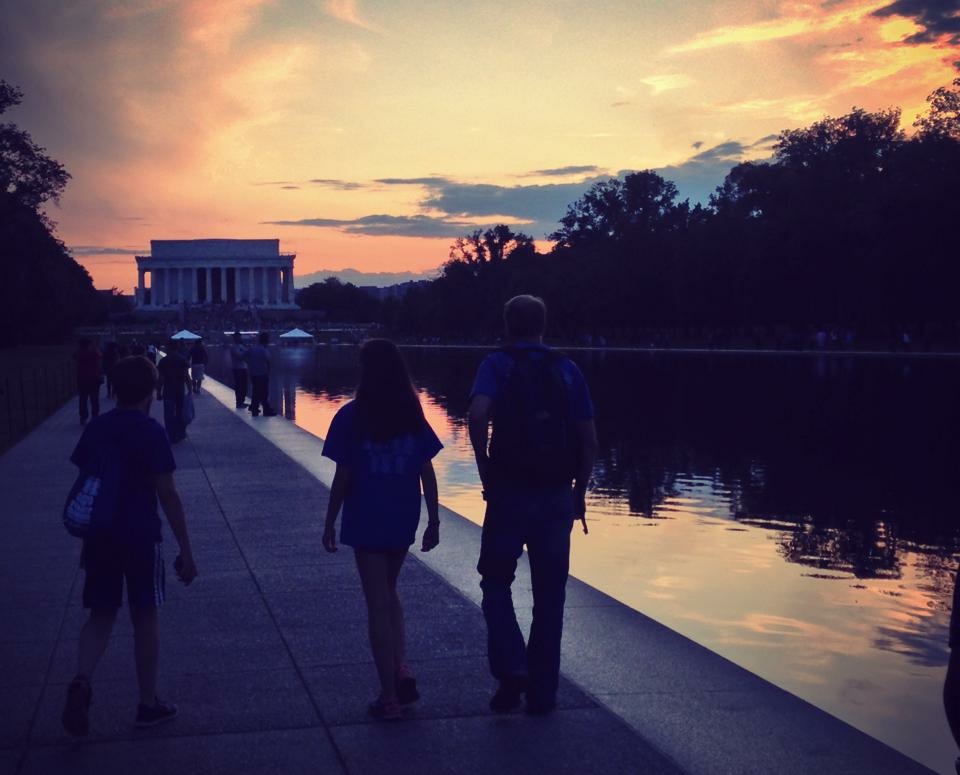 Above the water, I’m carrying on as normal. I’m saying to my kids, “It’s fine. It’s all going to be fine.” I’m telling myself that everything is under control. I’m trying to appear calm. I’m using the voice I use in a medical situation, where I’m scared, but am trying to reassure my child. It’s shaky and calm and a little too high. It’s not super convincing.

Just below the surface, though, I’m frantically paddling. The news each and every day is scaring the hell out of me. I’ve adopted the stance that this can all be fixed, if we just try harder. Even though I’m scared that all isn’t well, I’m acting like this is a solvable situation. I don’t want to scare the children.

In the past few weeks, I’ve attended a MLK parade and the Women’s March. I’ve called my

senators. I’ve given to the ACLU. I’ve been reading Waking Up White and taking notes. I’ve taken my family to the open house at our local mosque. I’ve attended a blogging workshop because I want to be a better writer. I’ve attended a behavior workshop for parents because what has worked for three of my kids isn’t working for the fourth. I’ve met with teachers, administrators and evaluators about most of my children. I’m figuring out what my kids need academically to thrive. I’m trying to show up for the vulnerable in our society. I’m on it. My earnestness is palpable.

This is all good. Learning to be a better citizen is overdue for me. There were a lot of things that I thought were handled that were, in fact, not handled at all.

Earlier this week, Bryan and I went on a walk around our neighborhood. I was really agitated. I was telling him that I wasn’t seeing the progress that I’d hoped for since I’d marched, workshopped and donated. It had been, “like a whole two days” and I wanted it fixed yesterday. My data-driven husband asked me where “specifically” I’d like to see progress being made. I started with our kids and quickly ramped up to the whole country. I wanted the whole country to be fixed already. He gently suggested smaller, more realistic goals.

It turns out that I don’t like it when I can’t fix things.

Caroline is a lovely person now, but as a toddler, she sometimes acted like a toddler.

One day, I picked her up from a preschool program and she didn’t want to leave her friends and the playground. As we were walking to my car, she made the bold move to sit down in the parking lot. She was staging her own one-girl protest. It was a toddler sit-in, which is actually quite effective. Then, in an act of impressive drama, she laid out flat. People were trying to back up, but there was a child in the road. I was trying to scoop her up, but my hands were full with her baby brother in a carrier and a diaper bag. The bag was swinging at Caleb’s head and he was wailing. I couldn’t get her off the ground without dropping Caleb.

A woman I’d never met before came over to me and asked, “Can I help you with one of them?” This was a reasonable and kind offer. But that’s not what I heard. What I heard was, “You’d better get this kid under control or you will have wild, rebellious preacher’s kids on your hands. Why is this so hard for you? No one else’s kid is hugging the pavement and backing up traffic. I see a lot of tattoos in this little girl’s future.” So, I said, “No, I’m fine. I’ve got it.” She took one look at Caro on the ground and said, “I don’t think you do.” Bless this woman who then boldly took Caleb off my arm, asked me which car was mine and carried him to it.

Whenever I’ve needed to learn a new role, God has placed people in my life to teach me. I’m feeling led to grow into a new role and I trust that some mentors are on their way. I think I’ll start by asking for help or at least accepting help when it comes my way. I won’t make the mistake of thinking that I need to do any of this alone. I won’t pretend that everything is under control.