Before I had children, I was very sure that parenting was all about “nurture.” The whole nature vs. nurture debate seemed silly to me. It was clearly all about parenting.

And then I gave birth to a scrappy little girl who was hard-wired to be competitive and fierce. The longer I am a mom, the more convinced I am that you can direct kids and tweak some tendencies, but there’s a lot that is already decided before you meet them.

Over Thanksgiving, my family engaged in several athletic and competitive activities. There was “ultimate spoons,”which is the regular spoons card game plus 10 children racing up the stairs to find the hidden spoons. Toddlers and property were both at risk. There were several “friendly” games of touch football that ended with eyes gouged, elbows thrown, heels and ankles injured. 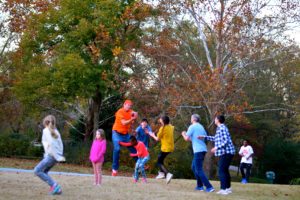 I’ve decided that my extended family is unusually competitive. My husband and brother once staged a triathlon at the lake, complete with my dad at the top of the driveway with a stopwatch. We used to have an adult Easter egg hunt, but had to stop the tradition because it became dangerous, both physically and spiritually. I mentioned at Thanksgiving dinner that I was planning on taking my daughter on a few college visits to places that weren’t my alma mater, including USC and Alabama. My brothers were outraged. One of them pushed back from the table and said that talking about abortion or gun control would have been less offensive dinner conversation.

This is a group that takes sports and winning very seriously. I remember now why I spent so much time reading as a child. The only sports I was even decent at were swimming and running; both just require you to do your own thing in your own lane.

I honestly don’t really care about winning. I always feel bad for the team that loses. I can’t watch any shows where people are eliminated. I’ve tried to understand the scrappiness that I see around me, but I just don’t get it.

I should have known better than to join in the touch football game on Thanksgiving. It looked like it would be fun to be a part of it. After all, my own kids and husband were in there along with my brothers and their kids.

Unfortunately, my brother forgot how I’m wired and handed me the ball to run.

Some people really want the ball. I think it must make them feel alive to race down the field or court. Then, there are those of us who honestly think we could die every time we touch a ball. 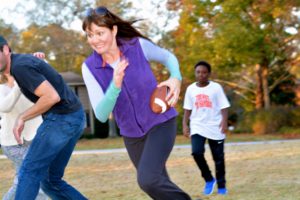 My dad took a picture of me running with the ball. I look terrified.

I really just wanted to be on the field because people I love were out there. And I wanted to be in the pictures and then have snacks. I got “benched” after a few plays because I blocked so that my daughter Elizabeth, who happened to be on the other team, could run down the field. This was frowned upon by my teammates.

I’m convinced that being a true competitor can’t be taught. Elizabeth spent most of the game doing front walkovers and handstands. She didn’t understand that she was in the midst of a

very serious contest. Treating each athletic endeavor like it’s a life or death battle is just the way that some people are wired. I’ve watched Caro chase down people in the final yards of a race with such intensity that I am alarmed. I admire it, but I will never fully understand it.

Those of us who really don’t want the ball and are really okay with other people winning aren’t really celebrated in our culture. That’s okay. Y’all knock yourselves out.

I’ll be over here taking pictures and eating snacks. And not getting hurt.