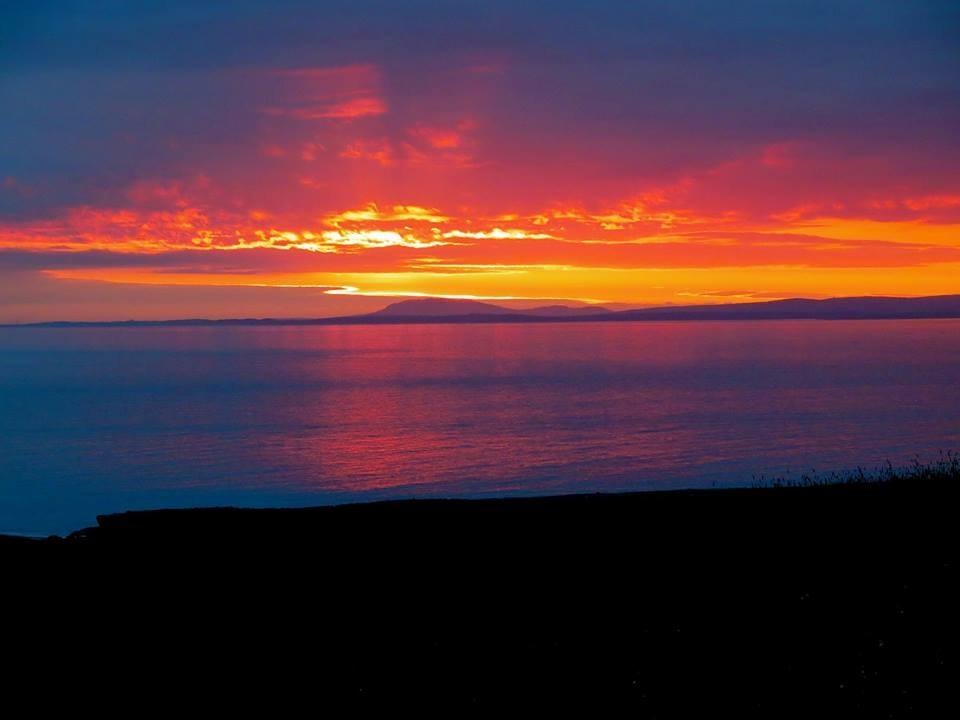 I didn’t love the idea immediately. I flinched a little the first time I heard a yoga teacher repeat the quote by Pema Chodron, “You are the sky. The rest—it’s just weather.” It felt very close to “you are the center of the universe,” which is exactly the opposite of what I am trying to teach my kids on a daily basis.

Lately though, thinking of myself as the sky and the swirling chaos around me as just weather has brought enormous comfort. As someone who has to remind herself that I exist outside of the people who need me, this concept can be useful as a way to establish some boundaries.

I forget that things happening to me, to my kids, to my friends, even to our nation, for that matter,

are just weather. I’m naturally inclined to think the stormy weather is everything. Everything. I forget that there is a permanent sky behind whatever the current storm is.

Seeing myself as the sky has also been helpful when I am deciding how deeply to jump into someone else’s life. I think it’s really important to remember that you can’t commandeer someone else’s sky. This is true of spouses, parents, siblings, best friends, and children. Everyone gets to be their own sky.

I have been reminding myself lately that my children are their own sky. I don’t get to be their sky. I

I remembered this sky image as I was hiding in my car this past week. Caleb had been asked to come back to his middle school and help emcee their spring choral concert. I knew it was going to be bumpy when I asked if they had any props or scripts and he said, “I’m just going to tell some jokes and probably do a rap.” I was honestly relieved that I had Caroline’s track banquet to attend. Standing in front of an auditorium full of people, with no plan for how I would fill up those awkward silences would be a form of fresh hell for me. I decided to come for the last part of the concert; mostly because my friends were texting me that he was doing a great job and that the rap was over.

I sat in the back of the auditorium just in time to hear Caleb botch a soloist’s name and then say, “It’s like your parents weren’t even thinking about me when they named you.” This drove me back out into the hall. I couldn’t bear to watch. Some dads were standing in the back laughing and saying, “Whoever that kid is, he’s fearless.” Fearless is not on my list of things I hope for my children.

Then, there were technical difficulties and Caleb was stalling while they tried to fix the music. He asked the crowd for a topic he could talk about. I was dying inside. Someone yelled out “football,” and Caleb said, “This is a chorus concert, kid.”

I ran out of the building and hid in my car. I told myself that he was in there, building his sky. I wouldn’t have wanted that kind of improv gig in my sky, but that’s not really my decision. He is figuring out who he is and who he wants to be. It would be wrong for me to interfere with that, but I also couldn’t watch.

More and more, my teenagers are building their own skies. I watch them place pieces in and rearrange other pieces, almost like a giant puzzle of who they are becoming. Some of the pieces aren’t my favorite. Sometimes, though, I need to remember that, while I know a whole lot about my sky, they know about their own sky. They are learning to spot weather patterns. They are learning to not put all of their energy into other people’s skies. They are piecing together their very selves.

When I was worried about something, my grandmother used to say, “This too shall pass.” I

remember her saying it when I was trying to finish my ordination exams and figure out what to do when I graduated from seminary. At the time, I thought her comment was a little dismissive. I thought she just didn’t understand how important this time in my life was in determining my whole future. Now I realize that she was reassuring me that none of these external factors would alter who I was and to whom I belonged. She was reminding me that it was all just weather.

Weather passes, but the sky remains.