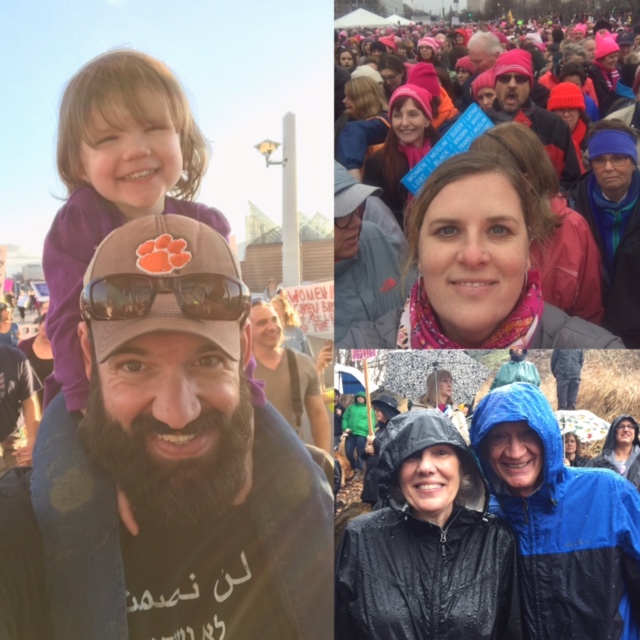 I was beating myself up for not carving out more time and space to participate in the Women’s March last week. I was embarrassed that I couldn’t make it to Atlanta because I only had about an hour during our busy Saturday to attend a protest. The irony that I couldn’t attend a women’s march because of my responsibilities as a mother was not lost on me. I was aching to participate in this global event. I was inspired by texts and updates I was receiving

all morning from members of my family that were marching in several different states. Although I didn’t watch the inauguration, I was inspired by pictures of Hillary Clinton, who showed up to the ceremony looking put together and sane. If I’d been Hillary, I would have shown up in my pajamas, carrying around a half-empty bottle of wine, yelling at the crowd through my mouthguard. I decided that the way forward was going to require me to access some moxie and courage. For myself and for my children, I needed to find my voice. I knew in my heart that one day in the distant future, my girls would remember that we were a part of this march and would feel proud.

My hunch is that most of us participating in the marches across the country wanted to be a part of something bigger. I was trying to explain all of this to my twins as we made posters. Explaining “why we march” to eight-year-olds requires a distillation to the very essentials. Some of the reasons I listed were that I wanted to remember that we all have a voice in this country and that I wanted to support people who would move our nation forward. I told them that I wanted to be sure that people were treated equally. I said that I wanted President Trump to know that there were people watching him. Mostly, I wanted the twins and I to march because we could: we live in a free country, our legs work and we had something to say.

So, even though our revolutionary activity needed to fit between basketball games, driver’s ed, voice lessons and dance practice, a path was opened for us. Fortunately, one lone woman by the name of Kate Van Cantfort, organized a sister march in Athens for Saturday afternoon. The twins and I left Caroline’s basketball game and headed downtown.

In the car, there was fussing in the back seat and one twin pinched the other twin. On the way to a “sister march,” sisters in my car were fighting. “Please don’t pinch your sister!” I said. “We’re on our way to march for love and justice. Pinching your sister defeats the purpose of this march.” It made me even more determined that we needed to attend. It reminded me that peace is hard work.

This brave organizer filed for a permit on Wednesday, put the event on social media, and by Saturday 700 of us showed up. We only had a permit to gather, though, and not to march. So, we walked around the Athena statue and it kind of looked like we were protesting the Classic Center. In a way, it was very “Athens.” It was quirky and earnest. It was hopeful and messy.

It actually reminded me of the little country churches where I sometimes preach. Just because we are worshipping with twenty other people in a tiny space doesn’t make it less worshipful than a worship service in a large cathedral. Our little march here was still a march.

Since that day, I’ve been hearing some comments from women who want to be sure that everyone knows that that the women’s march didn’t represent them. This is mostly from conservative white women who are pro-life. They thought the marches were ridiculous and unpatriotic. Here’s the thing: I never thought that I was representing them. I marched because I was aching to express my love for my sisters and brothers. I marched to alleviate some of my fear about our future. I marched because I wanted my voice to be heard, even though it was in a tiny march in a parking lot in a small town.

It’s just like when I vote; I never think that I am voting for a group of people. I am voting my conscience. This is what is so remarkable about our country: each of our voices and each of our votes are our own. There are plenty of women who didn’t want to have anything to do with the marches. That is totally their right, but I would ask that we sisters stop pinching one another. We are still sisters, even when we disagree.

I want my kids to see that we can disagree with people in our community, our churches, and even our family and the world will not end. I want my kids to see that even an hour spent participating in the revolution is worth it. And mostly, I want them to see that we marched back to our car and back into the real work of our love-filled, justice-seeking lives. I want them to know that our work of protecting the most vulnerable is rooted in our faith.

Mostly, I want them to know that their mother is against sister-pinching of any kind.

This is something I will have to work on in my daily life. I have been so alarmed by President Trump’s first week in office. I never imagined one man could do so much harm in such a short amount of time. I kind of want to shake my Trump-supporting sisters and ask them if they still think he’s a good idea. Is his being pro-life worth his being anti-refugee and anti-immigrant? Do they think a president who supports torture and doesn’t listen to intelligence agencies actually makes them safer? Did they know he would be such a small, insecure man who would so arrogantly abuse his power, right out of the gate? Are they a little embarrassed that he’s tried to muzzle the press, intimidate the National Park Service, and silence the scientists? I have to believe that these women, who are smart and conscientious women of faith, have higher hopes for our nation than what we’ve seen this week.