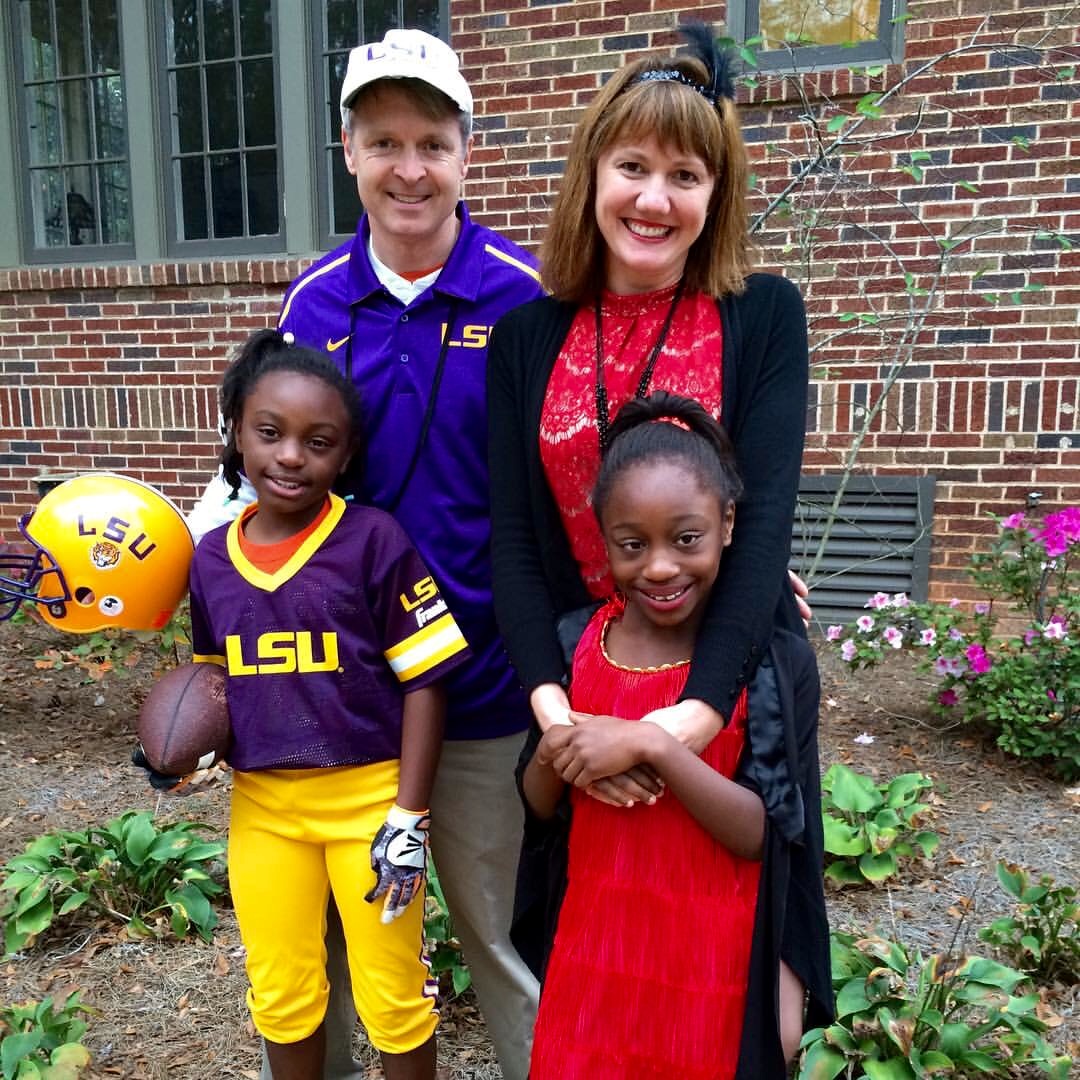 As I write this, Halloween is a few days away. It’s practically 100 degrees outside. We have no costumes and anything fabulous is off the table. We usually start planning in early fall. I love family costumes. Last year, we coordinated outfits with the twins: Elizabeth and I were flappers. Katie and Bryan were LSU star player Leonard Fournette and coach Les Miles. As a family, we’ve even been “Toy Story”: I was Jessie, Katie was Buzz and Bryan was Sheriff Woody. One year, Katie wanted to be

“twins” with Bryan and they both wore seersucker. I’m embarrassed to admit this, but ten years ago Bryan and I were “weather.” I was “partly cloudy with a chance of rain” and wore scrubs with cotton balls glued on my shirt to look like a cloud. I walked around and squirted people with water. Bryan was a tornado and we glued little cars and black streamers to his gray shirt. I can’t imagine why our big kids started trick-or-treating with their friends a few years ago!
Since it will be hot and we will be pulling together costumes out of our dress-up box and closets this year, I might put the twins in bathing suits and just say we’re a swim team. This will not be our strongest Halloween.

It doesn’t really matter anyway because October is really about one thing, especially for this particular white woman: everything pumpkin.

As soon as it arrives in stores, I buy pumpkin bread mix from Trader Joe’s by the case. BY THE CASE. They have to go to the back for more boxes for me. I also try pumpkin cereal, waffle mix, coffee, cream cheese and scones. My pantry is like a pumpkin massacre. Even though I am sweating in my car, I order Pumpkin Spice Lattes like they are going out of style. Because they are. Or at least out of season soon.

I didn’t think this was an especially white thing to do until a few years ago. I kept seeing memes everywhere that said something like: “If you say ‘Pumpkin Spice Latte’ three times in front of a mirror, a white girl in yoga pants will appear and tell you her favorite things about Fall.” I understand that some people find this misogynistic and are offended. I am not offended…I am just worried that they might be following me and recording my life.

A few years ago, I was directed to the website www.stuffwhitepeoplelike.com and let’s just say that everything on it sounded awfully familiar. (Group costumes for Halloween, anyone? Need I remind you that we were weather? The list also included farmer’s markets, coffee, hummus, picking your own fruit, pea coats, public radio, David Sedaris and yoga. Pretty much all of my favorite things.) Loving everything pumpkin has been the icing on the cake of my whiteness.

The clearest sign that the whole universe might not love all things pumpkin happened at the black beauty shop. One Christmas, about six years ago, I brought the very patient woman who manages the twins’ hair a loaf of homemade pumpkin bread. She seemed confused. I overheard another stylist say something about the “gross bread.” Surely they weren’t talking about my bread, right? Everyone loves my pumpkin bread. Pumpkin bread is nothing like fruit cake!
When we finally got home, a friend was visiting at our house and I asked him, “You have a lot of black friends, right? Do they eat pumpkin bread?” He was horrified and responded, “Anna, black people eat what we eat.”

I wasn’t convinced. I emailed a clergy friend who is black and asked him what I’d missed. He consulted his wife who suggested that maybe I’d misheard and they were calling one of the twins a “pumpkin head.” This nice man was trying to finish his sermon on a Saturday night and I was bugging him about having my feelings hurt over pumpkin bread. I decided to let it go, but made a mental note to not give anyone pumpkin bread until I had done some more research.

I also realized that I was going to have to get a lot tougher if I was going to be any sort of trustworthy guide for my girls. It was time to grow a thicker skin and a bolder attitude. I needed some moxie and some skills.

So, even though I am apparently about as white as possible, I decided to learn how to do black hair. I bought a rolling cart to put my supplies in and tons of ethnic hair products. I ordered a special hairdryer and a flatiron. I gradually accumulated deep conditioning soufflés and hydrating masques. I followed lots of little black girls around stores in Athens to study their hair. If I didn’t have the twins with me, I got some “You’d better back up” looks from their mamas. I wasn’t being cool.

On hair days, I’d haul a chair into my bathroom, hand the child an iPad and pull out snacks if things got rough. Doing their hair got easier and their hair starting looking better than when I’d started. I asked black friends for their advice. My white friends would ask how long it took to fix the twins’ hair and would gasp when I responded, “Three to four hours total per week-end.” I take out the plats, put oil on their scalps, wash and deep condition it, comb it out, dry it, section it, straighten it, twist it and add barrettes and baubles.

An African-American basketball teammate of my older daughter recently asked, “Who did your sister’s hair?” When Caroline told her that her mother did it, that I had styled it, her friend was really surprised. “It looks so good! I wouldn’t have guessed that your mom could pull that off!”, she said. I felt like a rock star and kind of unstoppable.

We still regularly visit the beauty shop, but I can at least maintain their hair now. I don’t have to be the one to fix their hair every time, but it is comforting to know that I can. I’ve taught my oldest daughter how to twist their braids back in place for when I’m out of town. This became necessary when I came home once to find their hair sticking straight up like Don King. I immediately asked two questions of my husband: “How many black women have seen them like this?”and “Has social services shown up at the door yet?”

I received an email from a sweet African-American friend of mine recently that said, “I was thinking of you with the holidays coming up. Remember sweet potato pie and not pumpkin. You and your family are in my prayers.”

We’ll take all the help and prayers we can get. I am learning every single day just how very white I am. Just this morning, Caleb laughed when I handed him my “Turnip the Volume” cloth grocery bag…the one with an adorable picture of a turnip that I like to take to the farmer’s market. “Even for you, Mom,” he said, “this is super white!” It wasn’t a compliment. This is going to be a long road. I need a Pumpkin Spice Latte.