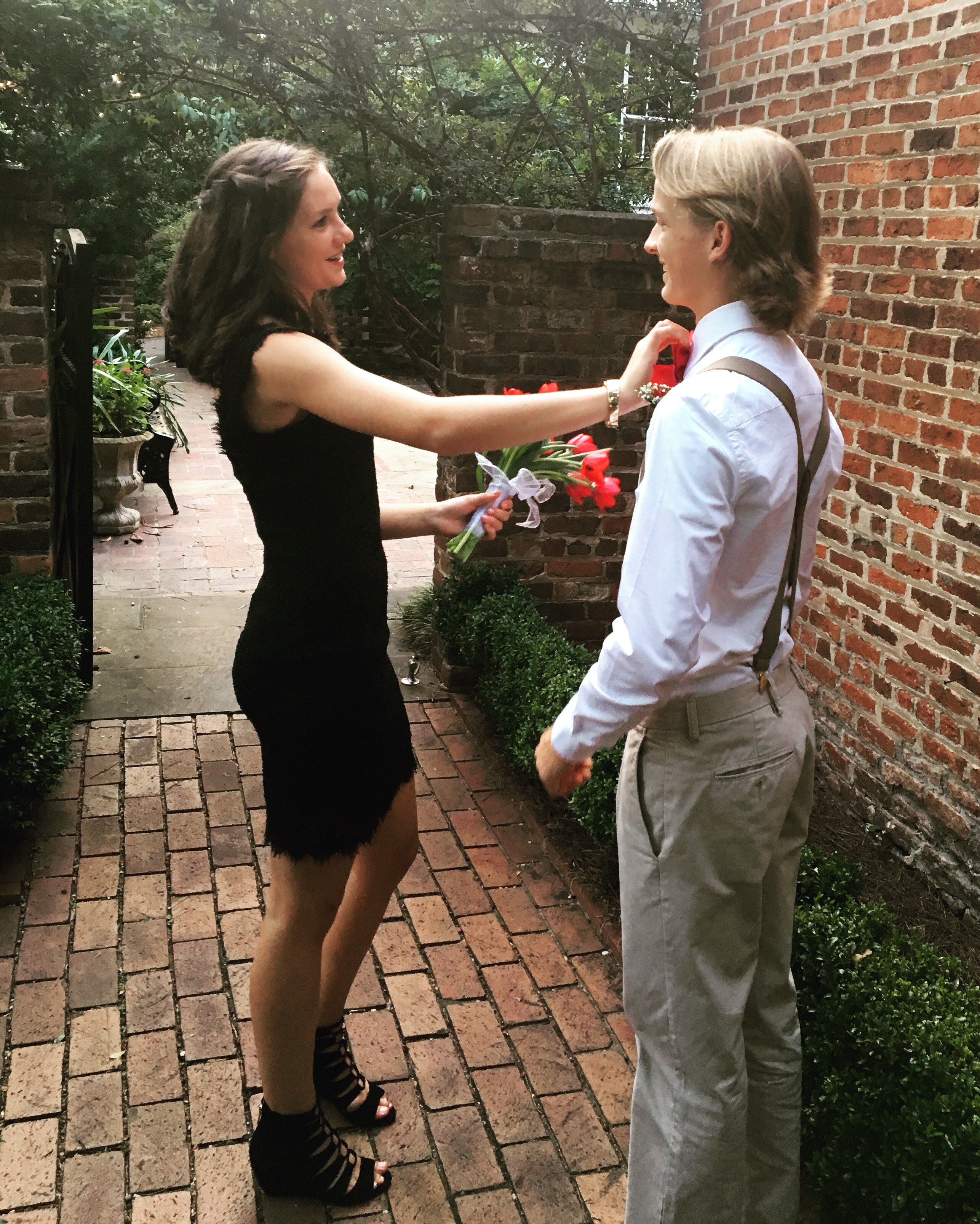 I really thought my son was going to be admitted to the hospital for his pneumonia.

We’d tried two different antibiotics. He was exhausted. Deep breaths hurt. Every time he’d tried to attend dance classes for the previous few weeks, he’d had awful coughing fits. He started wheezing sometime on Sunday. Antibiotics by I.V. seemed to be the next step. We had another follow-up appointment with the pediatrician Monday morning. So, I did what any reasonable mom would do on Sunday night: I baked six pies.

Something is wrong with me.

Thinking that my week was about to get turned upside down, I tackled something on my list. I was preaching on Sunday, but was too flustered to write. I’d been given the ‘money Sunday’ of stewardship season and was feeling the pressure of the whole church budget. I was hosting the cross-country team on Friday night at our house for dinner. I knew I couldn’t get my house ready yet. I knew I couldn’t cook the pasta yet or get the salad going. So, I made dessert.

I forgot to add sugar.

I let my family sample one of the pies and Katie came and found me. “I’m not an expert,” she said, “but I think the right word to use is ‘bitter’.” I threw away the pies.

Why did I start baking pies when my kid was really sick?

A sane person would have decided to either: 1. Go ahead and cancel the dinner on account of a child with pneumonia.
2. Just buy the freaking dessert. They still sell pies at the grocery store, right?

The only thing I can figure out is that I have more pride than I like to think I do. I’m by no means a perfectionist, but I do care what other people think about me. I’d like my house to not look trashed when people arrive…even if they are a bunch of hungry high-schoolers who aren’t going to notice. I’d like people to think I am a decent cook. I’d like people to talk about my chocolate chip pie using words other than ‘bitter’.

I spent Monday on Caleb’s lungs. Breathing treatments. Chest x-ray. Steroids and an inhaler. I called it “Operation Avoid the Hospital.”

I’ve been to the hospital with him before. Caleb’s stomach was really hurting when he was ten and I handed him an old-lady hot-water bottle to put on it. I thought he had a stomach bug. By the time he was rushed into surgery, his fever was almost 105 degrees and his appendix was rupturing. His lack of drama when he’s sick is almost suicidal in this house. I need to give him a flag to wave for fatal illnesses.

By Wednesday, I was being short with my children, ignoring my husband and generally chastising myself that I should be able to handle my life better than this. I was treating God like an unwelcome guest, sighing and saying, “Well, I guess you can ride in the car with me to go get the kids. We can catch up then, if you insist.” And then I got an eye twitch.

If given the choice, I’d rather my body exhibit stress in a more internal way. Last summer, I ran into a friend at the grocery store. As we were talking, she asked, “What is happening with your eye?” I told her that I’d had an awful eye twitch for a few weeks. “It’s barely noticeable,” she said, staring at my eye, after she’d just noticed it and asked me about it. It’s hard to convince people that you’ve got everything under control when your face is betraying you. It keeps me honest. Whenever I get an eye twitch, it serves as a bat-signal from my insides to my outsides that all is not well with my soul.

So, I went to yoga even though I had NO TIME FOR IT. It’s just that I have found grace before at yoga and hoped to find it there again. I was once in a class where the teacher started with, “You will not be getting a grade in this class.” People laughed, but I knew she had my number. I felt relieved and then I felt sad because I’m actually pretty good at yoga and I wanted to get credit for doing something right. I’m a sucker for earning good grades. Most people know they aren’t being graded in a yoga class. I sometimes forget.

Sure enough, by the end of the class on Wednesday, I found some grace. I’m very willing to extend grace to my friends, but struggle to offer it to myself. During the class, I tried to show myself the same compassion I show my friends. I realized that I need a lot more grace in my life. I’m hungry for grace. I looked at my life from the standpoint of a stranger and saw myself as someone who is trying very, very hard. Evaluating my week, I realized that I had probably made a mistake by scheduling a big dinner and preaching on the same weekend. Nonetheless, there were other factors that I couldn’t control.

I reminded myself that I didn’t invite pneumonia to my house.

I didn’t invite lab results that conflicted with the X-rays and the multiple phone calls it took to figure out what we were dealing with in Caleb’s lungs.

I didn’t invite the teacher emails and calls I received on account of someone saying something racially charged to Elizabeth at school. They handled it beautifully at school, but it required some hard conversations in our family.

I didn’t invite Bryan leaving to go biking and camping twelve hours after I got home from time at the beach with my girlfriends. I don’t totally believe him that he told me about this trip in advance. This made for a bumpy re-entry back into our routine.

I didn’t invite the growing sense of panic that has shown up when I look at sweet Caroline. Looking at her Homecoming picture a few weeks ago, I caught a glimpse of who she will be as a grown woman. She looked so grown-up. I cried with gratitude that I still get to be her mom. I cried so much that I scared m

y other kids. On Saturday, when I dropped her at the corn maze and caught a glimpse of the boy she was meeting, I thought, “Oh boy…these dudes are starting to look like men.” The next day, seeing her pull up in a Jeep with one of her best friends, with their hair wet from the lake and laughing, I was stunned by their youthful joy. Usually Caroline seems younger than fifteen to me, but this week she seemed much older.

I didn’t invite our hot water heater going out with Bryan gone. I wasn’t prepared for taking a cold shower before church on Sunday and then excusing the rest of the family from attending.

I didn’t invite the work storms my husband was weathering this week: taxes, sales reps, manufacturing crises. Bryan was having a demanding week at work and needed me to talk through some big decisions. Instead, I was buying pumpkins and mums for our porch and frantically spreading pine straw like one of the cross country runners coming for dinner Friday secretly worked for Southern Living.

It was busy, but all in all, it wasn’t our craziest week ever.

I think this is why I don’t ask for help much: next week will be crazy, too. I don’t want to postpone the dinner or ask to switch preaching to a different Sunday because we’ll have this much going on then, too. It’s embarrassing to have a household that is always in chaos. I feel like I should be able to pull off this job as a wife and mom, like it’s some kind of test and “with God as my witness,” I will pass! (Picture Scarlett O’Hara shaking her fists at the heavens.)

But what if there isn’t a grade at the end of this life?

Maybe instead of seeing my life as one long test, I could delight in it a little more. Maybe I can cut myself some slack and practice a little more self-grace. Maybe I can stop saying, “I don’t work, so I should be able to handle this all.” Instead, it would be nice to acknowledge that what I have happening in this house is a lot. I don’t have a paying gig right now, but I do have very full days and some pretty challenging kids. I need more grace in my life and a lot less “shoulds.”

Besides, what if I do pull everything off, but I’m a twitching, yelling, distracted mess in the process? Have we really gained very much? Isn’t that like making the pies with no sugar?

I found a note from Katie on the counter when I came home from the grocery store with ingredients for more pies. It said, “Don’t forget the sugar! MOM!” I asked Katie to help me make the pies and she was a great helper. We didn’t forget the sugar. We found some grace.