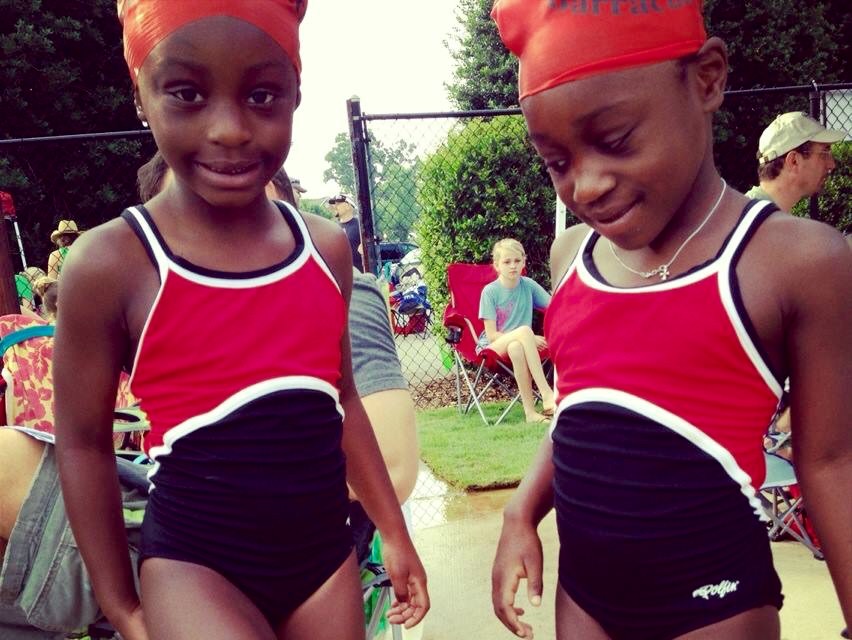 I was naive about a lot of things when we adopted the twins. For example, I didn’t think their hair would be that big of a deal. People warned us that “ black hair is a whole thing.” I have thick, coarse hair and figured it wouldn’t be that different. I figured we’d just buy better conditioner. I was wrong.

There is something very humbling about not having any idea what to do with your own child’s hair. I have two biological children whose hair I only think about when we need to get it cut every few months. I also have adopted twin girls who are African-American. Their hair is something that dictates our week-end schedules, our summer plans and whether or not we go to the park. (Public Service Announcement for white parents: sand is a nightmare in black people’s hair. Black hair should only be washed once a week to keep it from drying out and your kid throwing sand in my twins’ hair should be a misdemeanor, at the very least. I cannot pass a sand box without shooting it a dirty look.)

When my girls were approaching their first birthdays, I started getting comments from strangers that I needed to do something about their hair because they looked “like boys.” Their first year of life was a blur. The twins were born at thirty weeks and weighed less than three pounds each. In pictures from that first summer, they look undercooked and not quite finished but also vulnerable and terrifyingly beautiful. When we brought them home from the hospital, they needed to eat every two hours because they could only take two ounces of formula at a time. We were trying to keep them alive. Hair was not a priority.

It took me a while to figure out that hair that had been ‘done’ was one way of showing that a child was cared for. Hair matters. It was also a way of showing respect for their heritage. (Did you know that really good braiders can tell a story in the pattern they weave on someone’s head? A STORY!) So, off to the black beauty shop we went.

We were in trouble for multiple reasons. We were immediately told that our girls have “the hard hair.” This means that their hair is very coarse and very kinky. A white mother whose children have “the hard hair” is not a formula for success.

Also, have I mentioned that we are white and in a black beauty shop? The conversation would stop when we walked in the door. It wasn’t that we were unwelcome, it was just that we weren’t family.

We couldn’t very well leave toddler twins with strangers, so we would sit and wait for several hours. Often, one of us would be sitting in the stylist’s chair, holding Elizabeth in our lap. She has a tender head and cries a lot. I would apologize the whole time to the other clients, but they didn’t seem alarmed by a crying child getting her hair done. It wasn’t my favorite way to spend a Saturday.

Over time, it got better at the beauty shop. I watched and learned how to comb out their hair, section it, twist it and put in barrettes. The women working there forgot about us and talked more freely. I’d go home and look up phrases on urbandictionary.com. (For example, someone ‘throwing shade’ sounds thoughtful to me…like someone who helps an over-heated person find shade. It isn’t. The white translation is something like “dissing”. ) When another client asked me if the girls could have pork rinds for a snack, I knew better than to ask, “Are they organic?” Elizabeth thought they were fantastic.

When the twins were four, I asked the women at the beauty shop what I needed to do to protect the twins’ hair from chlorine. Chlorine is almost as bad as sand. I was already making them wear swim caps, but wondered if I should put oil on their scalps right after we left the pool. The whole place got quiet.

“Why are you putting babies in the water?” one woman asked.

“They aren’t babies anymore and they’ve been taking swim lessons,” I said. “They’ll join the swim team soon like their older brother and sister. We’re water people and they need to be able to swim to be safe!”

They looked at me like I was crazy and one older woman said, “Our people don’t swim.”

I knew better than to argue with a matriarch, but I also knew plenty of black people who swim. Okay, I knew a few. I went home and researched this “black people don’t swim” stereotype. I found the statistics alarming. According to a 2010 study commissioned by USA Swimming and conducted by the University of Memphis, 68.9 percent of African American children had “low or no swim ability.” Black children ages 5-19 die from drowning at a rate 5 1/2 times higher than white children, according to the CDC.

I didn’t know these statistics before my children had already started to swim. I didn’t know that this was a racial divide, so I did with my twins what I’d done with my biological children: I made sure they knew how to swim. This comes, I know, from a place of privilege. I know how to swim and can teach them. I swam on the swim team up through high school and am not afraid of water. I don’t spend hours at the beauty shop each week getting my hair fixed. I don’t need to protect the very real investment of time and money that my hair requires. I have the privilege of no one caring what my hair looks like. I have access to safe water. I have access to integrated swimming pools. I take none of this for granted.

The twins are excellent little swimmers. They were fast and confident swimming in the 6 & under relay at the county meet. They were wearing matching swim caps. I don’t remember seeing any other black children.

Several weeks ago, when the twins got home from school, we sat together and watched the video of Simone Manuel’s 100-meter freestyle race at the Rio Olympics. She didn’t have a great start, but she had an amazing sprint after the turn. Simone tied for a gold medal, becoming the first African-American woman to win an individual Olympic gold medal in swimming.

I loved the surprised look on Simone’s face when she finished the race and saw that she’d won. I loved her graceful acceptance. I loved how she honored those who had gone before her. I loved that she cried on the medal stand. I cried right along with her. I think there were probably a lot of surprised and proud Americans crying that day. I hope some of them were young black girls who looked at her and thought, “That will be me someday!”

Katie pointed out that Simone Manuel was both “beautiful and strong.” We didn’t talk about her hair. (It was fine, by the way.) We instead talked about her four medals (two gold and two silver) and about how hard she must practice every day in the pool. I wanted to keep talking about how beauty comes from strength, but the twins were done with this lesson for the day. They wanted snacks. They wanted to go play.

I watched the race again, all by myself. I sat on the couch with my computer & cried like the crazy white woman that I am. I cheered for Simone like she could hear me all the way in Rio. It was a glorious race.

I hope they were watching at the beauty shop, too.