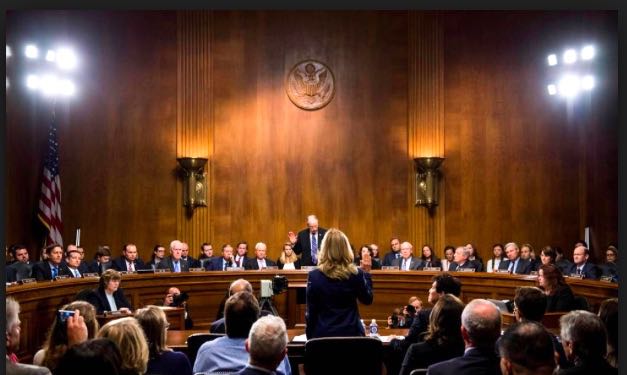 Moving from Atlanta to Mississippi after seminary was a bit of a shock. They are both in the South, but the pace is really different. In Mississippi, people drive slower and talk slower; they don’t race around like crazy people as much. There is more lingering.

In my work at the church, I felt like I wasn’t getting things done as efficiently as I wanted. I had plans and lists and lots to accomplish. It was taking forever to visit church members in their homes and at the hospital. One day, when I needed to stop by my neighbor’s house to pick up something for the church, I decided to leave my car running so that I could just pop in and right back out.

When his wife invited me in to come in “for a minute,” I said that I couldn’t because my car was running. He looked outside and said, “Well, you’d better go turn it off then.”

I thought of my neighbor as I listened to the Senate committee racing through the hearings of Judge Kavanaugh. As the senators pushed for a vote, one of the things that upset me was how little they seemed to care about Dr. Ford. Yes, they probably believed her and were polite during her testimony, but they didn’t care enough to stop the process.

One important way to show people respect is to give them the time that they deserve.

It was so rude of me to leave my car running at my neighbor’s house. An important part of my job was to actually spend time with church members;

It was rude of the committee to push for a vote so quickly. It’s their job to make sure this process of nominating a person onto the Supreme Court is fair and decent.

On the day after the hearings, I was so discouraged that nothing seemed to have changed after Dr. Ford’s testimony. It felt like the Republicans stepped over and around her and went on with what they were already determined to do. They wouldn’t turn off the car.

Now that there is an FBI investigation and a tiny bit of time to regroup, I have more hope in the process. It might not change the vote and Judge Kavanaugh could very well still be confirmed onto the Supreme Court. But at the very least, the country took a little bit of time to show respect to all of the parties involved and for this incredibly important office.

It’s good we are turning off the car and sitting for a minute.