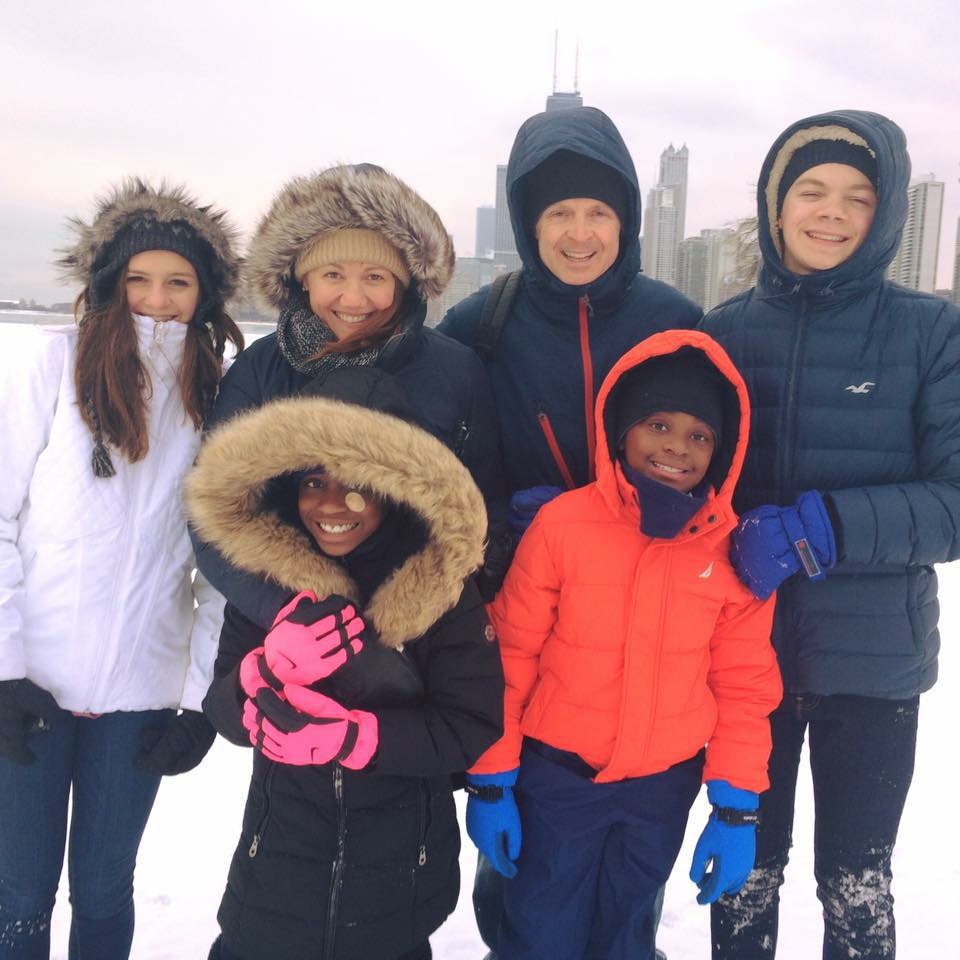 Here’s the thing that is true but that I don’t like to admit: it’s hard to be a mom. It’s hard for me, at least.

I resist saying this because I know that I have it pretty easy. Whenever I start to feel overwhelmed by my children’s needs, I tell myself that we are not refugees. I tell myself that this is all doable, because it is. But it’s still hard.

We’re in the middle of making some hard school decisions about one of our kids; I haven’t been able to get much clarity. A friend of mine, who is a wicked smart school psychologist, offered to look over my child’s test scores and other data. She was really helpful and encouraging about our options. She also acknowledged that I had a lot going on as a mom. I was hesitant to admit that raising my four kids is hard. I resisted admitting that I was having a hard time, even though my eyes were swollen from crying. After all, I have a wonderful spouse, we have a safe and warm house, and we have family and friends that love us.

I see my mom friends handling tough situations every single day. These women are superheroes in yoga pants. One of my friends was sitting in church with her son and someone made an announcement about the upcoming Women’s March. The woman speaking said something about wearing your “pussy hats” to the march. My friend’s 10-year-old son immediately perked up and loudly whispered to his mom, “Isn’t that a bad word? Is it a bad word or a good word? Did she just say it in church?” His brain was exploding. He needed his mom to help translate this situation. My friend, in a flash of wisdom, told him, “It’s a word that you cannot say unless you have one.”

My friend was just sitting in church, minding her own business, when she suddenly had to handle a dicey situation. Moms are on call at all times. Being a mom is a ridiculously demanding job that matters tremendously. We are shaping human beings. This is important work.

I am finding that my teenagers need me less frequently than my little ones do. But, when they need me, it’s usually more urgent and important. Their decisions can have long-term consequences. Being a mom to teenagers requires a whole different level of honesty and fearlessness.

I have another friend who was sending her child off to college and wanted to put together a first aid kit for her to keep in her dorm room. My brave friend decided to include condoms. This was a wise and reasonable decision, but it was still brutal to contemplate. She didn’t think her daughter would need them, but she thought it would be better if she had them, just in case. So, my friend stood in the condom aisle of Target for so long that it got weird. How do you locate condoms that your daughter might or might not need that are safe, but not too fun? There are no manuals for these kinds of mom situations. Our best hope is to learn from each other and to cheer for one another.

Maybe instead of getting stuck on all the ways this parenting thing could go wrong, we could start celebrating the small victories. Every once in a while, we get it right.

Last week, just before dance class, I was squeezing Elizabeth’s feet into her light tan jazz shoes that I’d been promising to replace. The teacher walked by and I told her that I was ordering new shoes and I wondered if tan is what they’d be wearing in the recital. The teacher mentioned that they make dance shoes for different skin colors. It turns out that several companies now make jazz shoes in “chocolate” and “mocha” colors. How had I not noticed that the light tan jazz shoes were a jarring contrast to Elizabeth’s long brown legs? Of course jazz shoes were supposed to elongate the dancer’s leg. Instead, the shift from her leg to her foot was very abrupt. It looked like she was wearing white bucks.

One of the other teachers at the dance studio sent me a link to a website and I ordered Miss Elizabeth some “mocha” colored jazz shoes. She loves her new shoes and is so proud of them. Instead of beating myself up for not recognizing this sooner, I’m choosing to be grateful for people that steered me in the right direction. I’m choosing to see this as a small victory.

When we were bringing the twins home from the hospital, I was asking the nurses a lot of questions. The twins each weighed less than five pounds, but they were only sending us home from the NICU with vitamins and special premie formula. Didn’t they need medicine or special medical equipment? The nurses did say that we should keep them warm so that they wouldn’t burn extra calories. Also, we were to feed them every two hours. This did not seem like comprehensive instructions for raising twins. One of the nurses finally said to me, “Wanting to do a good job as a parent is what counts the most. You’ve got this.”

I don’t know what challenges each of you will face this week with your kids, but I have no doubt

that you’ll handle it all with bravery and kindness. Although this parenting work is both amazing and devastating, your wanting to get this right is what will make all the difference. Being a mom is hard, but you have mad skills. You are the right person for the job. From one mom to another, I’m cheering for you. You are not alone.