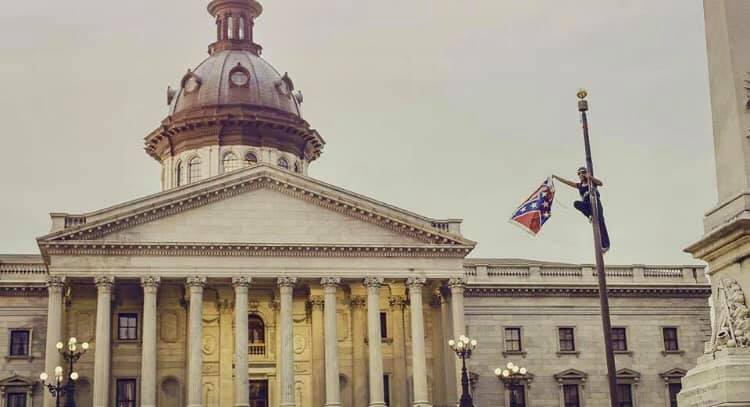 I cried the first time I saw images of her climbing the flagpole.

The images from that day show such fierce bravery and such determination for justice that they make me teary. At the same time, I feel so convicted by Bree’s actions that I want to look away.

Last week, I was helping with a forum on dialogue about race and the keynote speaker, Dr. Bettina Love, mentioned Bree Newsome’s heroism. In addition to being inspired all over again by Bree, I also learned something important about being more than just an ally to the oppressed.

On June 27th 2015, an African-American woman named Bree Newsome scaled the flagpole at the South Carolina State House to bring down the Confederate flag. Ten days earlier, Dylan Roof had killed nine church members at Emmanuel AME Church in Charleston, SC in a racially motivated mass shooting.  Following the massacre, there was a public push to take down the Confederate flag. Bree and other activists thought it was taking too long; so she took the matter into her own hands.

In the videos and pictures from that historic day, you can see a man in a construction hat at the bottom of the pole. I assumed he worked on the grounds, but actually, he was an environmental activist from North Carolina named James Tyson. In several news articles, he was listed as her “spotter,” but he was so much more than that.

In addition to teaching Bree to climb, he helped her into the fenced area and stayed at the bottom of the pole. He was arrested with her, but he didn’t appear on talk shows with her. He stayed in the background.

The most amazing fact about James Tyson was that he put his hand on the flagpole.

At one point, the police threatened to tase the flagpole if Bree didn’t come down. She was climbing a metal pole and the police were planning to send electricity through it in order to stop her. She started yelling that her climbing was a non-violent act and James Tyson began imploring them to not harm her.

As the situation escalated, James put his hand on the flagpole. His simple action meant that if she were electrocuted, then he would be, too. The same people who were willing to tase a pole with a black woman on it would not tase the pole once a white person could be harmed by their actions.

This action cost James very little. He knew that as a white man, he had influence and clout. He used his white male privilege to protect someone who needed it. Ms. Newsome was quoted as saying, “He refused to let go until I was back on the ground.”

This image of placing one’s hand on the flagpole has stayed with me all week. I keep thinking about ways that I’ve missed the opportunity to do this for people of color, for trans people, for Muslims, and for immigrants.

At the race forum, Dr. Love stated that people of color don’t need any more allies; what they need are co-conspirators. I’m ready for that.

In her book, I’m Still Here: Black Dignity in a World Made for Whiteness, author Austin Brown writes about white people coming up to her after she speaks at conferences with confessions about their own racism or times they’ve been complicit in racist actions. They don’t do this with her white colleagues. She has decided that they want absolution from her, but that this is too much for her to carry. “I am not a priest for the white soul,” she writes. So, what she says to them is, “What are you going to do differently?”

Here’s what I’m ready to do differently: I’m going to put my hand on the flagpole. It’s that simple and that hard.