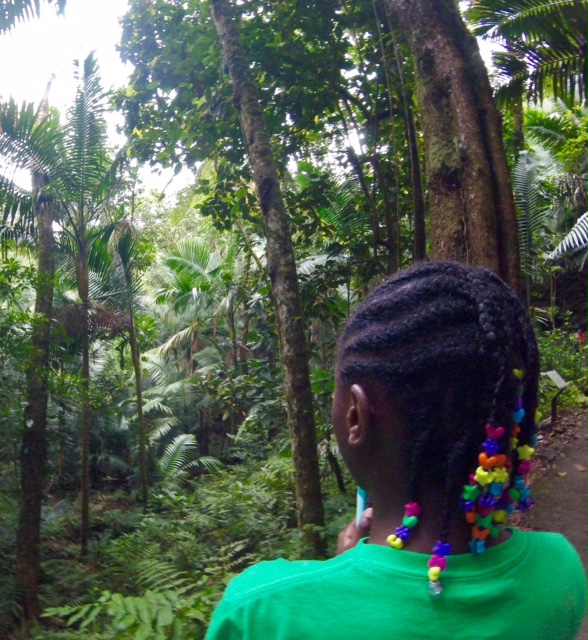 I could tell by her face that it was something bad. My daughter Caro was walking towards us after she’d gone to get water out of the car. She’d locked our only key in the rental car.

We were in Puerto Rico for a family vacation. We’d spent the day hiking and driving up the parkway. Now, we were stuck at a snack shack in the Puerto Rican rainforest. We don’t speak Spanish. Only one of our phones worked and it required that you stood pretty much in the road.

I panicked. I was sure we would be spending the night up on the parkway. While my husband and daughter started figuring out who to call, I looked around at the other people in the parking lot. I spotted a tour guide who’d just pulled up with a busload of people. I figured he was used to freaked out tourists and went to ask him for help. He tried so hard to help us. He used our phone to call “a guy” who can get into cars. He drove my husband up to the ranger station since they are the only ones with reliable phones and drove him back down when no one was there. He offered to drive my husband all the way down the mountain with his tour group to see if they could find someone to help.

This is how all horror stories begin: mom left in rainforest with four children and dad gets in car with a stranger.

After a long time, the rental car company said they could send someone to help us. They didn’t say that they would. Then, miraculously, a locksmith called and asked for our location. I think that’s what he asked, since he only spoke Spanish. The tour guide was about to leave with his group when I handed him the phone, asking him to please talk for us.

The tour guide let us borrow his language. He told the locksmith our location and also our situation.

He made all the difference in the world. I was reminded of the old hymn that says, “What language shall I borrow, to thank thee dearest friend?” Lending language is a holy thing.

There are languages unique to addiction, gifted children, church committees and travel soccer. There are languages unique to remodeling, growing your own food and physical therapy. People who have been through hospice with their families know a powerful and important language that they can share with others. The same is true about parents of special needs kids and those on the autism spectrum.

I’ve been thinking about the generosity of the people who have shared the language of special needs kids with me to help me navigate the school system. I’ve tried to share it with others, too. A friend sent me a text recently that said she was going to a meeting about her child to discuss the tiers. “What in the world are tiers?”, she asked. We met for lunch and I told her everything I’ve learned from other people helping me.

Just by being alive, we’ve all learned some languages that we can share.

As our family stood by the rental car, scanning the road for our rescuer, I thought there was about a fifty percent chance that a locksmith would actually arrive. It had been a few hours since this ordeal began and we were tired. A very elderly man pulled up in a beat up truck with plantains in the back. We were sure he was our guy, but he wasn’t. More cars came and went. Then, a really handsome man in a silver jeep pulled up, hopped out and started working on getting into our car. My husband introduced himself and swears that the man said, “I’m yours.” The rest of us are pretty sure he said either “I’m Lars” or “I’m George.” It’s understandable that my husband was starstruck: the man looked like a movie star. He was not what we were expecting. He opened our car in about 30 seconds and then drove away like a knight in a shining jeep.

As we drove down the mountain, we were laughing about how Caro couldn’t look directly at the man because his teeth were so blinding and his hair was so perfect. Bryan said that he didn’t expect the best-looking man we’d seen in Puerto Rico to be our locksmith. I was surprised that we didn’t die in the rainforest, but I guess sometimes things don’t go from bad to worse. Sometimes, we borrow the language of hope and everything works out just fine.